ISRO Releases Pictures of Impact Craters on Moon of Chandrayaan-2 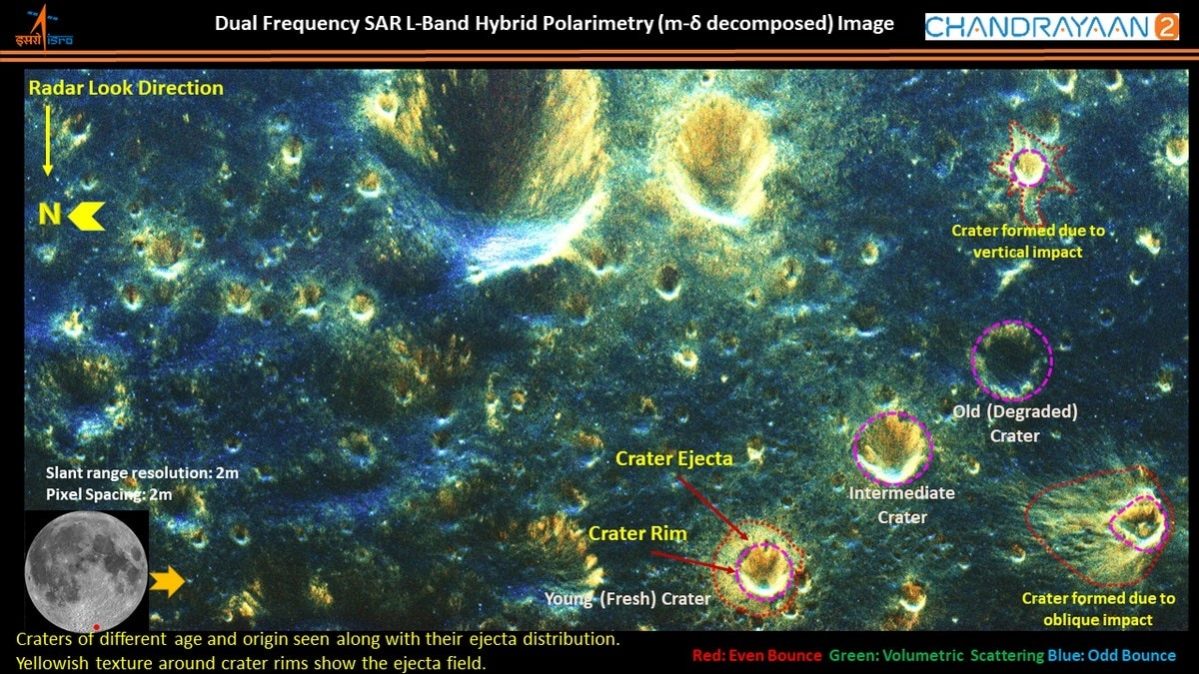 The Indian space agency has published new images of impact craters on the moon’s surface taken by its Chandrayaan-2 Orbiter.

The Space Research Organization of India (ISRO) on Tuesday, while posting an image on its Twitter ID, said the images were taken by the double frequency synthetic aperture radar (DF-SAR) in its Chandrayaan-2 Orbiter .

According to ISRO, the Moon has been continuously bombarded by meteorites, asteroids and comets since its formation. This has resulted in the formation of countless impact craters that form the most distinct geographical features on its surface.

“In contrast to volcanic craters, which are the result of an internal explosion or collapse, impact craters generally have raised edges and floors that are lower than the surrounding terrain,” said ISRO.

The study of the nature, size, distribution and composition of impact craters and associated ejection characteristics (material that is thrown into an impact) reveal valuable information about the origin and evolution of the craters.

According to ISRO, weathering processes result in many of the crater’s physical characteristics and the ejection material is covered by regolith layers (sand, dust, loose rock and earth on a hard surface), which makes some of them undetectable with optical cameras.

The Indian space agency said the SAR is a powerful remote sensing instrument to study planetary and subsurface surfaces due to the ability of the radar signal to penetrate the surface. It is also sensitive to the roughness, structure and composition of the surface material and the buried ground.

However, the L and S band SAR in Chandraayan-2 is designed to produce more details about the morphology and ejection materials of the impact craters due to their higher resolution imaging capacity (inclined range from 2 to 75 m ) and complete polarimetric modes in independent mode as well as joining modes in S and L band with wide range of incidence angle coverage (9.5 degrees – 35 degrees).

In addition, the greater depth of penetration of the L band (3-5 meters) allows exploring the buried ground at greater depths.

“The DF-SAR of the Chandrayaan-2 Orbiter has been operated in full polarimetry mode, a gold standard in SAR polarimetry, and is the first in any planetary SAR instrument,” said ISRO.

This image presents many interesting facts about secondary craters of different ages and origins in the lunar region of the South Pole, the space agency said.

“The yellowish tone around the edges of the crater in the image shows ejection fields. The distribution of ejection fields, whether uniformly distributed in all directions or oriented towards a particular side of a crater, indicates the nature of the impact.” explained ISRO.

According to ISRO, the image shows vertical impact and oblique impact craters in the upper right and lower right, respectively.

Similarly, the roughness of ejection materials associated with impact craters indicates the degree of weathering that a crater has suffered.

Three craters of similar size along a row in the lower right of the image show examples of young crater, moderately degraded crater and an old weathered crater.